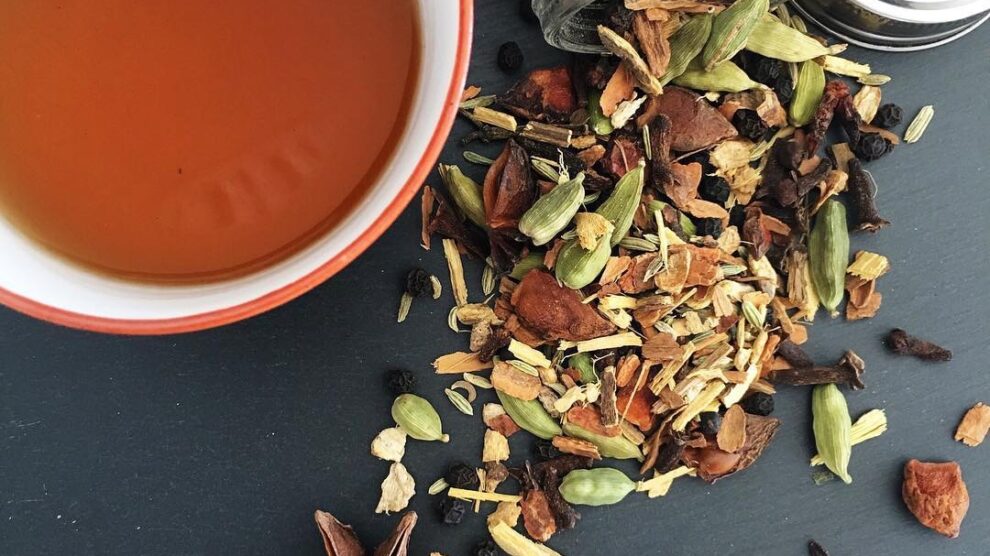 Drinking a good chai is a beautiful way to nourish the soul and is part of our cafe culture. Andrew Yeo from Teapot Teas shares with us the mystery and history behind our love of Chai, and the energetic properties of a good cup.

It starts with a conversation with his Indian friend and researching about chai, one of the main questions that kept coming up from his peers was – what is the origin of masala chai and how did this omnipresent drink come to be?

The overwhelming response to this was “grandmother’s medicinal chai”.

Grandmother, the traditional caretaker of the household, would brew a blend of plant roots, bark and seeds if a family member became ill or as a tonic to stay healthy through the changing seasons. In fact, many of the ingredients now found in a classic cup of masala chai are useful for treating colds, flu, stomach ailments, digestive problems, lung issues and other common maladies. These family recipes were handed down from mother to daughter, and then to granddaughters throughout the many the generations, and spanning hundreds of years.

Then came the Brits. Back in Britain, folks had developed quite an expensive habit of drinking Chinese tea, which became their most popular beverage. As the Britain’s East India Company was seeking independence from the high cost of Chinese tea, it established its own tea plantations in northeast India. This turned India into a big, profitable tea party, opening the floodgates to an ocean of tea on the subcontinent.

One generally held belief (or chai conspiracy theory) discovered repeatedly whilst researching the history was that the British, knowing tea’s addictive properties and seeing an enormous new local market, at first dispensed tea at no cost to the Indian population. This marketing plan paid off, as India became among the world’s largest consumer and producer of tea. Eventually tea, with its energy-giving medicine, made its way into Grandma’s spice concoctions.

Add some milk and sugar, originating from both the Indian Ayurvedic and British teatime traditions, and masala chai was born. There is, of course, no way to substantiate this story, but it seems quite plausible.

Later, the British tradition of tea sipping seeped into Indian culture. Chai dukans, or chai shops, became the new meeting place where men would gather to drink chai and socialize. At dhabas, the Indian 24-hour truck stops, Punjabi truck drivers demanded a strong cup of masala chai as a restorative drink to get them through the long hours of driving.

From an Ayurvedic standpoint, high quality in a spice means that it is full of prana, or life-force. Using prana-full spices makes the chai come alive. Old, stale or powdered spices, on the other hand, will produce a lifeless end result. Within a plant, prana is the living intelligence that is transferred to our body upon ingestion and digestion. This botanical intelligence is what communicates to our cellular intelligence and shows it how it can go about healing itself.

To protect the life- force of the spices, it is important to keep the spice intact, in its whole form, until it is placed into the simmering water that will extract its prana. The easiest way to do this is by purchasing whole spices instead of powder: fresh ginger root, whole cardamom pods, cinnamon sticks, peppercorns, and so on. When using spices that have been pulverized on the other side of the world months before and have been sitting on the shelf for just as long, this prana, along with flavour and healing potential, has escaped by the process of oxidation.

The best tools to have are a mortar and pestle, an electric spice grinder and a coarse grater. Indian chai wallahs will often just use a rock to smash the spices. We have heard of sadhus, or wandering monks, who simply crush the spices in their teeth, but I do not recommend this. Personally, I prefer mortar and pestle. Perhaps the most important benefit of processing the spices manually is that one’s own energy and intention, or prana, is infused into the spices as they are crushed. This is where chai making can become an alchemical art, as one transmutes one’s chai into a golden prayer for friends and family.

Traditional masala chai spices help to increase the body’s prana in other ways. Ginger, cinnamon, cardamom and other chai spices support the function of the lungs, thereby allowing one to absorb more elemental air prana through the breath. In addition, almost all of the spices are digestives that help the body assimilate nutritive prana from food. And many of the warming chai spices act to burn up toxins in the body, thus clearing away unwanted sludge that impedes the flow of healing prana through the channels of the body. Honoring the prana and innate wisdom of the spices, therefore, is paramount as we prepare a deliciously healthy cup of masala chai.

Chai is such an integral part of Indian culture, I offer my humble gratitude and I raise my teacup to the circles of grandmothers on the other side of the world who gave us the gift of masala chai.#popthekettleon and brew some of Teapot Teas JEWEL OF INDIA ? our masala chai. Made with no black tea so that it can be enjoyed with or without dairy or nut milk while going through a detox. Energetically infused with Tigers Eye the stone of personal power in action.

This is a powerful stone that helps you to release fear and anxiety and aids harmony and balance.

It stimulates taking action, and helps you to make decisions with discernment and understanding, and unclouded by your emotions.

Traditionally it was carried as an amulet against curses or ill-wishing, and is known to give you courage, self confidence and strength of will. Are you ready fo change?

For more information on the award winning Intentional Tisanes of Teapot Teas and updates on upcoming events and workshops follow us onwww.teapotteas.comhttps://Facebook.com/TeapotTeashttps://m.facebook.com/AtTheTeapot/https://Instagram.com/teapotteashttps://Twitter.com/Teapotteas